This project was a challenge for me. I took the Chinese character "Monkey" and turned it into the shape of a monkey. As you can see the process was a little rough and difficult, but just as a sculptor shapes the clay, I shaped the lines to slightly bend into a monkey. I imagined it as if there were wires, and I had to shape it into what I wanted.  It was a tough task, and I used the same technique that I would use when I see shapes out of clouds. I took that concept and created my character out of the brush strokes of the Chinese character. 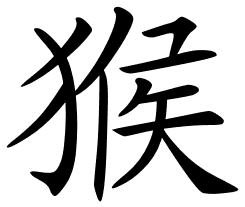 When I finally came out with a general idea of what I wanted, I used Adobe Illustrator to take that concept and turn it into a crisp logo and played with the shapes more. The molding of the logo did not stop until I was completely satisfied with the results. I wanted the monkey to be the center of attention, but at the same time, I wanted at least two different colors. I placed the monkey on the middle of a circle and made it white and the circle red. According to my research, red is considered to be a lucky color and is widely used in festivals and important events such as weddings.
However just the red circle and the white background could easily be mistaken for the Japanese flag, so I decided to push the design more by creating an oval design and turning the background of the monkey symbol into a lantern. I added yellow to the mix with the lantern sine it symbolizes royalty and power to the throne. Also, the first emperor of China was known as the Yellow Emperor. China is also referred to as yellow earth, and its main river is known as the Yellow River. I believed that the color would be significant to the whole design. Prior to the project, I knew I had  one shot to make an impression with a small picture, and I wanted everything to have symbolic significance. This is part of the reason why I love creating  logos based on themes because I get to research historical facts and customize it into my art.

Special thanks to Aisha K. Mijares (AIS Instructional Aide) for her hard work in designing this beautiful logo!