Journey to the West, sometimes referred to simply as Monkey, is a classic novel that was written during the Ming Dynasty in 16th century China. Its author, Wu Cheng, was born into a family that harbored literary ambitions, though they were bureaucrats and shopkeepers by trade. Influenced by his father, a student of Confucianism and other classic traditions, Wu Cheng developed a love for literature and wrote elegant poems and stories. Journey to the West is, at once, a traditional Chinese folktale, a comic fable, an epic quest story, an allegory, and a pilgrim’s dramatic journey. 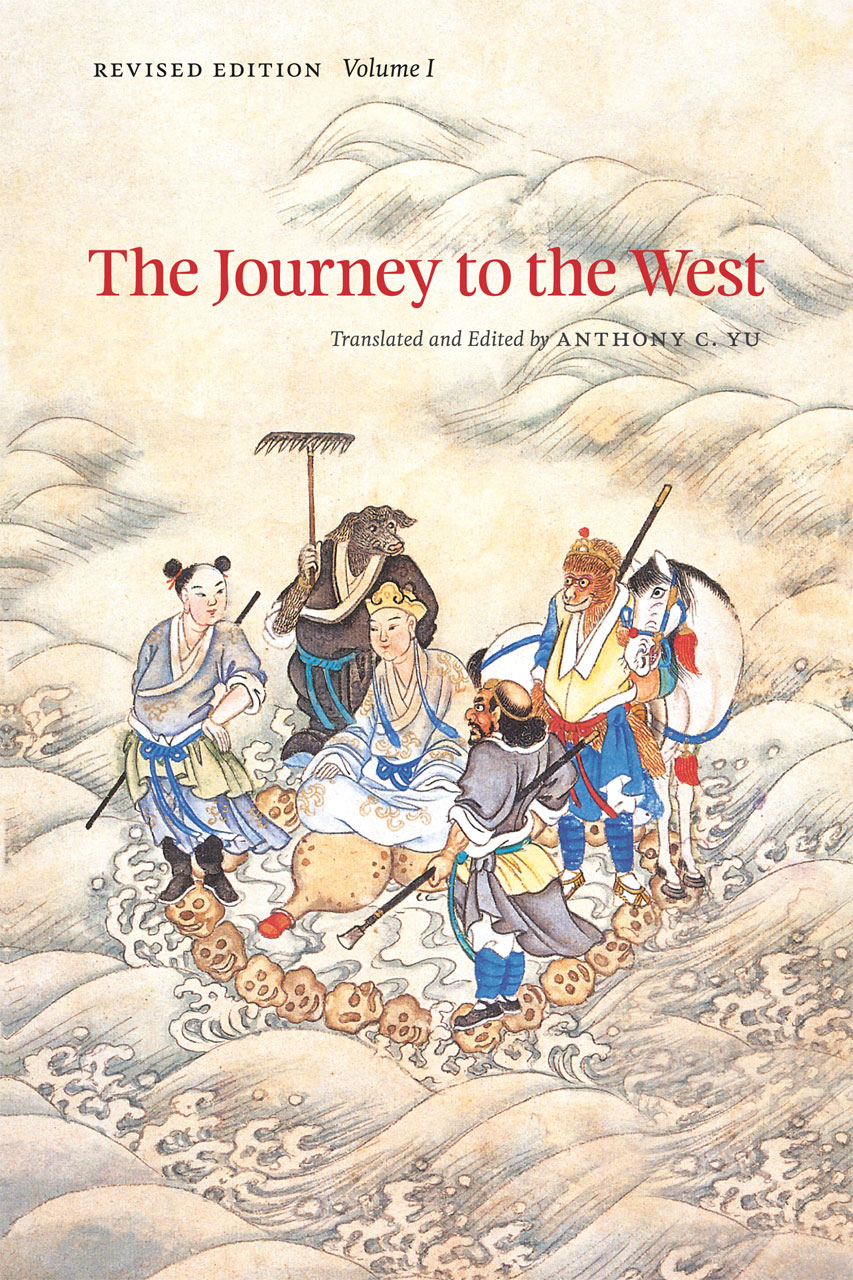 The novel is based on the pilgrimage of an actual historical figure, Xuanzang (c. 602-664), a Buddhist monk who traveled the Silk Road from China to India in search of sacred scriptures. He returned with 657 Buddhist scrolls, many of which he translated into Chinese. Xuanzang became the best-known Buddhist monk in Chinese history, and the story of his dangerous but ultimately triumphant journey worked its way into Chinese folklore, where for nearly a thousand years it was retold in various legends, tales, and dramas. These rich literary antecedents form the backdrop for Wu Cheng’s hundred-chapter novel, which bursts with mighty clashes and heroic feats and features a thrilling cast of beasts, demons, and demi-gods.

The first seven chapters of Journey to the West serve as background to the main story. They feature the main character, Monkey, and outline his mythical birth from a stone, his acquisition of supernatural powers, his shape-shifting abilities, his rebellious, arrogant antics (while in heaven he crossed his name off the list of the dead), and the culmination of all his defiant behavior: banishment from heaven and burial under a mountain for 500 years as punishment. Monkey is ultimately given a chance at freedom when he is invited to accompany and protect the pilgrim Xuanzang on his journey to India. Two more animals with supernatural powers, “Pig” and “Sha Monk,” are also assigned to join the pilgrim on his journey; these three disciplines have been pressed into service to atone for their sins from past lives. The little group will encounter a series of eighty-one trials before procuring the scriptures and returning home to China. Journey to the West is the dramatic story of their adventures.

After Monkey has been introduced, subsequent chapters describe Xuanzang’s early life, and then the adventure story begins, as the pilgrim and his three disciplines make their perilous way along the Silk Road. They traverse a forbidding wilderness of craggy gorges and high mountain passes holding hidden dangers. Multiple plot twists involve Xuanzang being captured by flesh-eating, life-threatening demons, amid violent attempts by the three disciples to intervene and save him. With its religious themes and framework, the plot can be read as an allegory of the spiritual life. Despite daunting challenges and setbacks along the way, the disciples persist on their solitary path, seeking atonement for past sins and, ultimately, salvation. When their mission is accomplished, they return safely to China, where Monkey King is granted Buddhahood for his service.

At the heart of the novel Journey to the West is the character Sun Wukong, otherwise known as Monkey, a trickster with supernatural powers, and a highly revered character in the history of Chinese pop culture. If Journey to the West is one of the earliest epic quest narratives, then the Monkey King is one of the original superheroes. According to legend, Monkey was born from a magic stone that had sat on a mountaintop since the dawn of creation. From this stone, Monkey inherited many powers, including strength enough to lift his 13,000 jin (7,960 kg. or 17,500 lbs.) staff ,with ease, and speed enough to travel 34,000 miles in a single somersault. 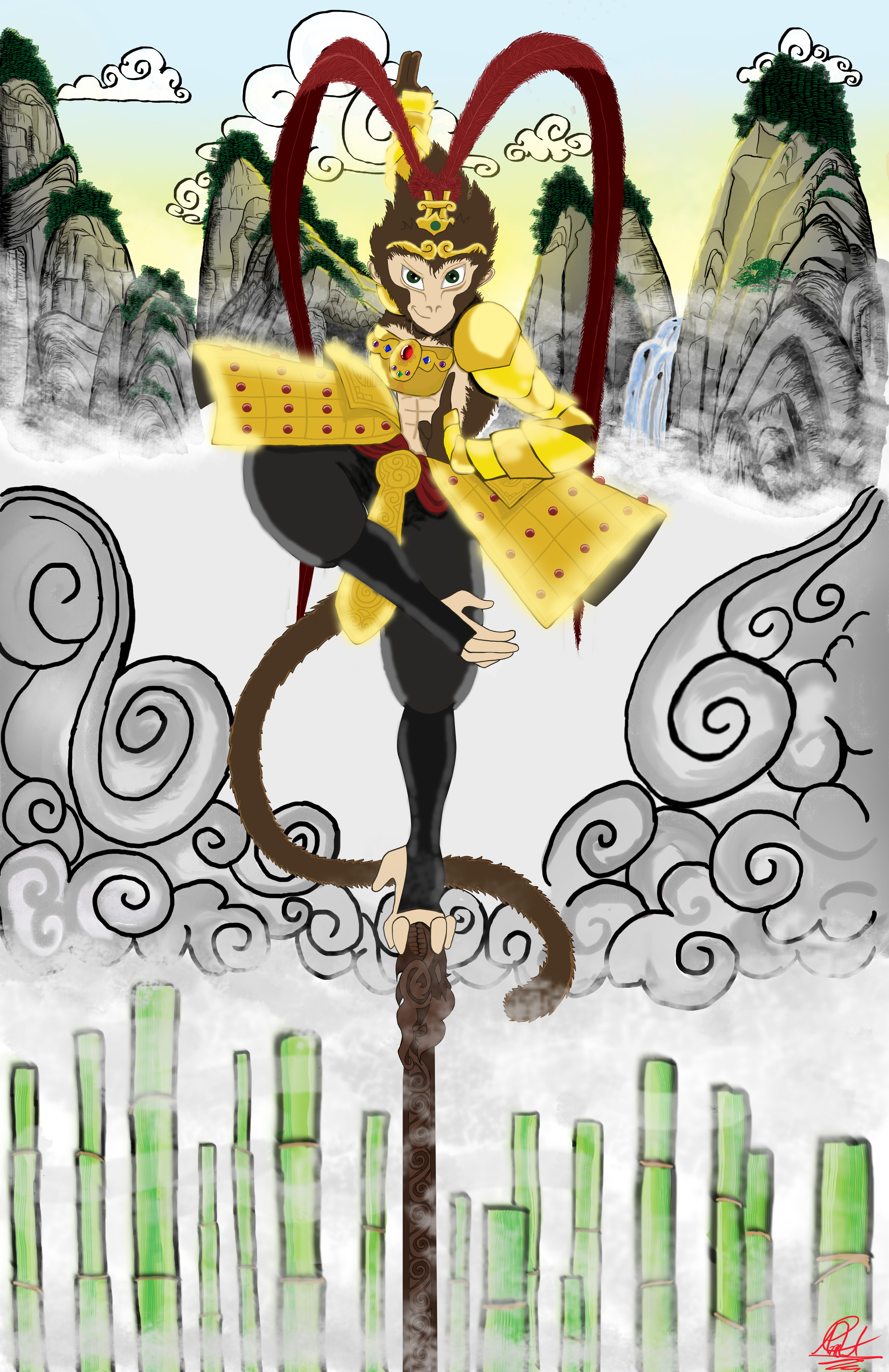 Monkey was the prototypical transformer, able to change himself at will into 72 shapes, from weapons to wild animals. He could control the wind and part the water with his magic spells. His battles with adversaries such as the formidable Dragon King were epic. A troublemaker from the start, Monkey was given a minor position in heaven, but when he realized he was considered a demi-god and his position was a lowly one, Monkey flew into a rage and got evicted from heaven. He spent the next 500 years in exile. He was finally released from imprisonment so he could accompany Xuanzang on his epic pilgrimage to India. Monkey’s antics and shape-shifting feats make him a comic foil to the other main character, Xuanzang, who seems by comparison ordinary and somewhat dull. The minor characters Pig and Sha Monk, also possessed of magical powers, round out the trio of disciples on the journey.

In spite of its comic tone and entertainment value, The Journey to the West is a serious work of literary value. Like many classic texts, it uses satire to critique the political and social structure of its time. Some scholars think Monkey’s rebellious behavior represents the peasants’ struggle against the corrupt establishment and the power-brokers, such as Emperor Jiajing (1522-1567), who held sway. The novel has also long been seen as a religious allegory which depicts China’s two main religions, Buddhism and Daoism, as mutually compatible. For four hundred years, Journey to the West has been influential in Chinese cultural, political, and religious life. Schoolchildren have been taught to see the Monkey tales as symbolic of the triumph of good over evil. Politicians such as Mao Zedong have exhorted followers to “emulate Monkey’s vigilance, his toughness toward enemies, his optimism in times of adversity, and his courage in carrying out the revolutionary struggle” (Zhang). The novel has had tremendous influence in the arts, where contemporary adaptations and interpretations abound, in forms as diverse as opera, dance, plays, big budget Hollywood films, children’s books and graphic novels, video games, and even Saturday morning cartoons.

Yu, Anothony C., trans and editor. The Monkey & the Monk: An Abridgment of The Journey to the West. Chicago: University of Chicago Press, 2006.

The content for this page was made possible by the hard work of Associate Librarian Madelyn Horton.